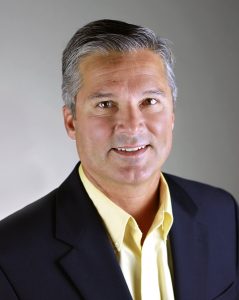 As President of Michels Energy Holdings Inc., a wholly owned subsidiary of Michels Corporation, Osborn is responsible for all aspects of pipeline, natural gas distribution and electrical power construction operations across the United States. Osborn has been involved in the pipeline industry for 40 years, working his way through the business as a laborer, teamster operator and then into management.

He joined Michels in 2001 as Vice President of Pipeline Construction operations. In ensuing years, Osborn helped to grow Michels into one of the largest full‐service pipeline contractors in North America. He was promoted to Senior Group President of Energy in 2019 before taking the helm at Michels Energy Holdings.

Osborn remains active in the industry, having been elected President of the Pipe Line Contractors Association in 2017 and serving on the PLCA Board of Directors, PLCA Labor Negotiating Committee, International Labors Training Steering Committee, and Teamsters Pension Fund. 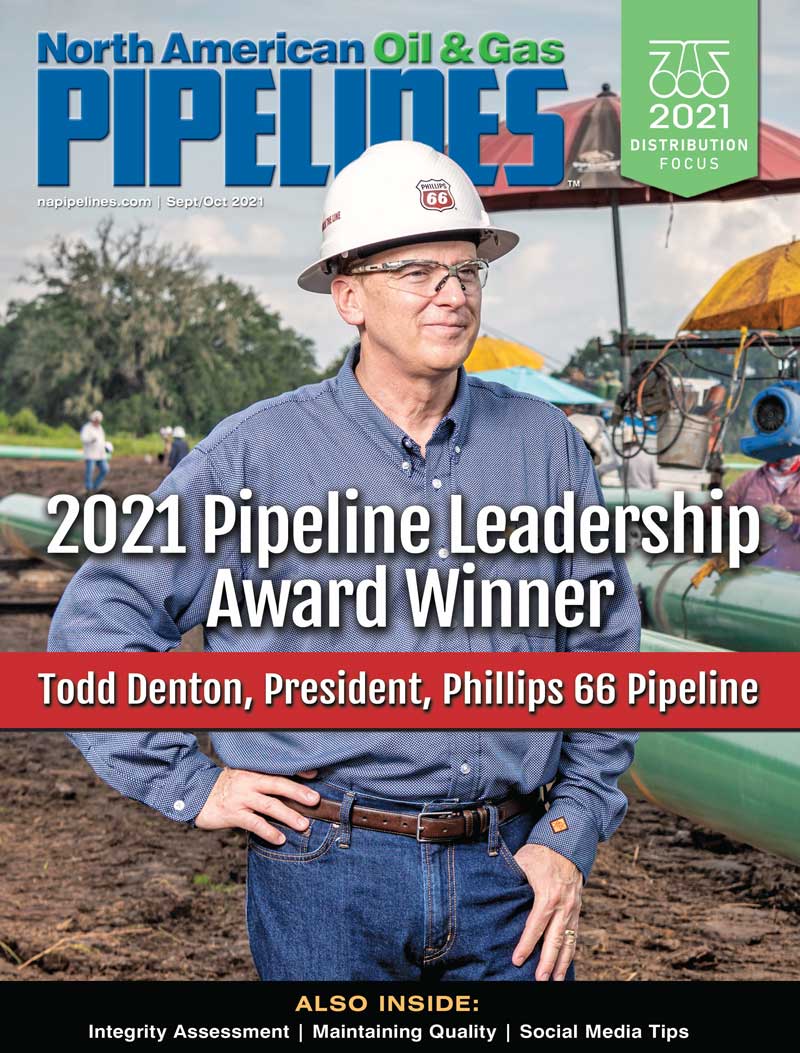 Todd Denton has earned a reputation as a champion of safety. Through his work as president of Houston-based Phillips 66 Pipeline LLC, his involvement in various industry groups and his collaboration with regulatory agencies, Denton has fostered numerous programs and initiatives that have improved pipeline safety performance across the board.

It is because of these far-reaching industry achievements that Denton has been named the 2021 Pipeline Leadership Award winner. The annual award will be presented at the Pipeline Leadership Conference, Nov. 17-18, in Houston, organized by Benjamin Media Inc., publisher of North American Oil & Gas Pipelines, in cooperation with Continuum Capital.

As a member of API and AOPL, Denton serves as chair of the API-AOPL Pipeline Safety Excellence Steering Committee (PSE SC) and has become a renowned expert and champion for pipeline safety, says Dave Murk, manager of Pipelines, Midstream and Industry Operations at API. Murk has worked with Denton since 2016 through API’s Pipeline Subcommittee. Read the full article here. 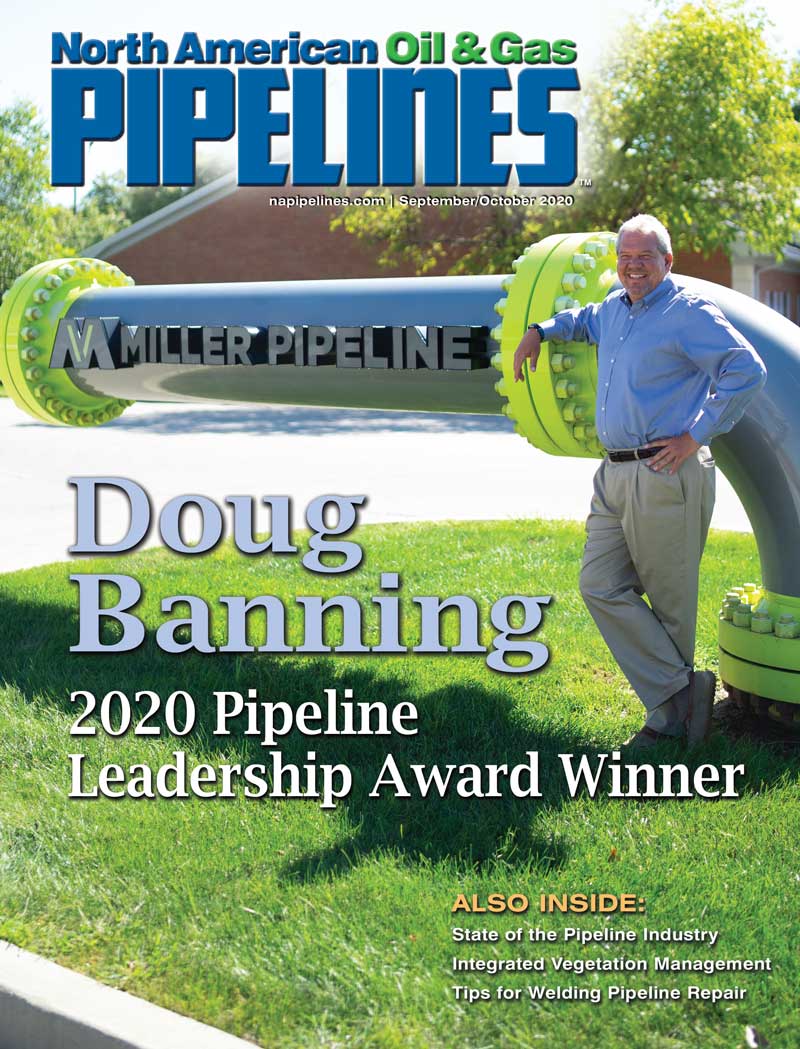 There are two principles that Doug Banning has held fast to in his 35-year career in the oil and gas pipeline and distribution industry: prioritizing safety and being surrounded by good people.

Those two tenets formed the foundation for an impressive number of achievements that have led North American Oil & Gas Pipelines to present the 2020 Pipeline Leadership Award to the recently retired CEO of MVerge, the parent company of Miller Pipeline and Minnesota Limited.

Banning has led the growth and transformation of Miller Pipeline, and subsequently MVerge, through people, process and practice. He presided over the successful integration of 10 acquisitions that supported growth and development of the company. He led innovative efforts around productivity tracking and performance improvement both for Miller’s crews and for local distribution company (LDC) customers.

One of Banning’s biggest achievements was in prioritizing a culture of safety — before it was popular and expected. As a pioneer in this respect, Banning helped spread the gospel of safety throughout the pipeline industry, and it’s one of the things he is most proud of in his career. Read the full article here. Safety isn’t just a buzzword for Shawn Lyon. It’s a passion. The president of Marathon Pipe Line LLC is widely considered a champion for safety management systems (SMS) in the pipeline industry and a proponent of building safety culture. He has been called Mr. SMS, and he advocates that pipeliners must serve as “guardians of public safety.”

Based on his leadership and advocacy on SMS and implementing API RP 1173, Lyon was asked to represent the liquids industry on the Pipeline and Hazardous Materials Safety Administration’s (PHMSA) Pipeline Advisory Committee group focused on SMS, created in 2016. Tracy Townsend didn’t take the most direct route to the pipeline and utility industry. She has spent the last 17 years at Washington Gas, the 170-year-old local distribution company that serves Washington, D.C., Maryland and Virginia. Once upon a time, though, she thought about becoming an attorney.

Instead, Townsend found herself in the underground construction realm, pioneering a strategic alliance program between a local distribution company and a contractor. Her efforts showed it was both possible and practical to lower costs while installing capital assets.

Through collaboration and communication Townsend negotiated a partnering between Washington Gas and NPL Construction Co. that has had a lasting, positive impact on the two companies, serving as an example for the industry at large, says Mark Bridgers, principal at Continuum Capital.

“Tracy Townsend led one of the most impactful industry transformations on behalf of Washington Gas in 2001-2003 with the development and implementation of a ‘Strategic Alliance’ that yielded unprecedented improvement in productivity, safety performance and quality compliance,” Bridgers says. “Still in place today, this relationship has met the test of time.”

Townsend’s ability to collaborate, communicate and lead in the development and implementation of the strategic alliance program at Washington Gas is why she is the 2018 Pipeline Leadership Award recipient. Read the full article here. The Trans-Alaska Pipeline System winds its way 800 miles south from Prudhoe Bay to Valdez, Alaska. Construction on the project began in 1974, and the first barrel of crude oil started flowing through the pipeline in 1977. It was during this time that J. Patrick Tielborg got his start in the industry he would serve for the next 42 years.

At the urging of his wife, Julia, Tielborg worked on the Trans-Alaska Pipeline System — or TAPS as it’s often called — during the summers of 1975, 1976 and 1977, while attending law school at St. Mary’s University, in San Antonio, during the spring and fall.

After he earned his law degree in 1978, the pipeline industry called to him again. He answered an ad for the Pipe Line Contractors Association (PLCA) to serve as executive secretary, and he was hired in September of that year by the PLCA and two years later became a member of Akin Gump Strauss Hauer & Feld LLP, the law firm that represents the association. Tielborg would go on to serve the PLCA and its more than 200 members for the next 39 years, becoming managing director and general counsel for the association in 1995, the same year he became a partner at Akin Gump.

Throughout his career, Tielborg has negotiated dozens of national and project-specific labor contracts with the four major craft unions — the Teamsters, the Pipe Fitters, the Laborers and the Operators — to maintain labor peace in the industry. During his tenure, PLCA members have successfully built hundreds-of-thousands of miles of domestic pipeline. He also oversaw the establishment of the PLCA Safety Committee to promote safe working practices and the association’s scholarship program, which has benefited more than 225 recipients. It is for these accomplishments that Tielborg has been named the winner of 2017 Pipeline Leadership Award. Pat Michels has guided Michels Corporation’s ascension in the North American oil and gas pipeline industry, steering its advancement during economic boom and recession. Since Pat became president in 1998, Michels has expanded from seven operational divisions to 18. In the past decade, Michels has climbed from the 93rd to 34th largest contractor and No. 1 pipeline contractor in the U.S. Under Pat’s leadership, Michels has assembled a team that constructs some of the largest transmission projects in North America and stands out in the industry for diversity with stations, integrity management, pipe fabrication and distribution pipeline teams. In all, Michels has nine divisions that influence the gas and oil industry.

Pat has created a culture in which excellence is expected. One example is Michels’ position among the most highly regarded HDD contractors in the world. Along the way to achieving records, Michels has provided customers with possibilities for safe construction of pipelines in areas that would otherwise be considered impossible. In the same vein, Michels has embraced Direct Pipe technology, pushing its limits beyond initial expectations.

Pat is a champion of safety and quality, supporting Michels’ full-time, dedicated safety, environmental and quality control programs, which were among the industry’s first. Whenever possible, Pat visits rights of way and leads JSA meetings.

Pat and his family also vigorously support the communities in which Michels operates and in the industries it serves. This includes the Dale R. and Ruth L. Michels Family Foundation, Dale Michels Center for Heart Care and Michels Scholarship Fund. As vice president of engineering, projects and construction, Chuck Shafer has been an integral part of a major capital improvement and modernization program to update NiSource Inc.’s natural gas system, which serves approximately 3.5 million customers across seven states.

In 2007, NiSource began the discussion for the modernization program, which officially turned dirt for the first time in 2008. One of the things that make the program a success is a strong and consistent message from NiSource leadership that allows Shafer and his team and all of the partners to look at the long-term big picture.

NiSource invests approximately $1.4 billion a year on energy infrastructure improvements between its gas and electric customers. The overarching goal is to meet and improve upon the utility’s customer commitments for the next 100 years. During the 20-plus year modernization program, NiSource expects to spend $20 billion on its gas system. In 2006, the system had 40,471 miles of distribution pipeline and 334 miles of transmission class pipeline, of which, 8,000 miles was bare steel, cast iron pipe.

The company tackled its highest risk facilities first and since the program’s inception, NiSource has been able to reduce its priority pipe (bare steel, cast iron) from comprising 21 percent of its system to 15 percent.

What makes Shafer and NiSource leaders in the industry is the rapid growth and current size of its capital improvement and modernization program, the innovations they are applying in planning, design, procurement and construction. Particularly, the collaboration and integration with construction service partners—with emphasis on “partners.”